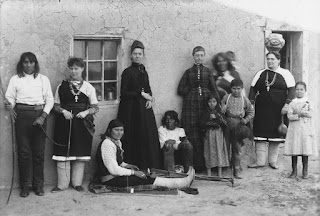 
I've spent the past week examining many of the astonishing photos in the Lummis archive that we've collected over the past three years. I'm so thankful to the Autry National Center for sharing these files with us to include in the documentary, and so look forward to sharing them with a wide audience~!

Today I was looking at a book written by Bradley B. Williams, entitled Charles F. Lummis: Crusader With A Camera. I love the title. Here is a passage from the book that I enjoyed, because it made me imagine what it must have been like to meet such a colorful character as Charlie. Enjoy.

In 1889 Mr and Mrs Clay Needham were traveling on the newly completed Santa Fe railroad on their way west when just outside Albuquerque the conductor asked if they would mind sharing their Pullman with another man. The conductor assured the Needham's that the gentleman would not only be an entertaining companion, but was also an authority on the Southwest. In a moment the porter arrived with some baggage, followed by a rather small man dressed in a faded corduroy suit and cowboy hat, a .44 calibre revolver strapped to his belt. ‘My name is Lummis’, the little man said, extending his right hand, his left hanging lifeless at his side, ‘and I live in Los Angeles’. Mrs Needham stared incredulously at the corduroy cowboy. ‘Not C. F. Lummis, the author of “"Quito's Nugget"”!’ she said, glancing knowingly at her husband and then at the visitor. ‘Yes’, came the reply. ‘I wrote that tale’.
Posted by Jayne McKay at 11:55 AM